This report of the action at round 2 of the MSCA series at Winton comes thanks to Vicky Rowe, and includes a little story of her education on ripple strips, with images thanks to David Buntin.

Having traveled in convoy with a few of the usual suspects from Donnybrook, it was only fitting that we enjoyed a refreshing ale together in the evening at the Northo (North Eastern hotel in Benalla). I was a little weary, starting the day at 3.15am for my flight from Perth, followed by the logistics of collecting the car, then the long drive to Benalla.

Maybe that’s why I found myself accepting the request to write this article. “Sure I can help you out Mr Buntin, so long as I’m acknowledged as a guest writer”, I said, as if I had some plan of how that would benefit me. Then someone quipped; “well if you’re writing it you can give yourself any credit you like”. Yes smarty pants, I can. So here goes. My round up of round two, in amongst a little story on my education of ripple strips at Winton raceway.

I should explain that my current situation isn’t providing a steady income, but is allowing a lot of flexibility. The lure of family and potential business opportunities on the east coast has me traversing the country on a regular basis. “Oh look dear, my business meetings in Melbourne coincide with an MSCA event. I think I’ll stay a bit longer”. So far this strategy has enabled me to join in on the fun for round one in early February at Sandown, and now for round two, just a few weeks later (Saturday February 25). Wonder how long I can keep this up?

I guess it’s a big effort for some to get to Winton, especially on a Saturday, so competitor numbers looked a bit down. Six groups ran, but that included a small Regularity field and a group of about 25 superkarts, which provided a good spectacle, especially the rolling starts. The superkarts sounded like a swarm of giant bumble bees were descending. They zipped past at pace, with at least a couple of the 250cc karts registering 1:22 lap times. Very brave I must say and probably very taxing, so well done to all involved. I don’t understand how their competition runs, but some faces looked pretty somber towards the end. Several were DNF by the final race, including the two fastest.

As for the Lotus in 1500 – 1999cc category, there were mostly Elises spread over two groups, with Lee Gardner, Chris Johansen (who left early to get to the theatre) and Alec Spyrou expressing their competitive spirits in group five, with a range of other fast cars. Then David Buntin, Josh Robbins, Kris Cook, Tromp Hofmeyr and I shared group six, along with the clubmans.

Alec took top honours with a time of 1:37.03, followed by Lee, Chris, David and Josh filling the top five positions in the category. Phil Nicholson won his category with his supercharged Elise. As did Ben Allen, although he was in his new Focus RS.

No PBs today. Everyone was complaining that they were off pace. Was it the conditions? Not sure. There was a lack of grip in the morning when it was cool. Then the afternoon got really hot and sticky, in the cockpit and on the track.

Feeling the heat in the morning though was Tromp. Still reeling from his brush with the clerk of course at Sandown, he was miffed at another call from officials after his first run, instructing him to get out of the way. Given it was his first time at Winton it’s understandable if he was a bit slow on his first run, but I think they just assume everyone competing was experienced. Let’s see if you can keep out of trouble next round Tromp. I have a laugh listening to the banter amongst the Lotus guys. Competitive on the track, but even more so with the stirring. Always helpful, most are happy to share their view on the best way to tackle each section of the track, so those of us trailing behind listen intently to the varying views. You never know what pearls of wisdom might be revealed. On Saturday some of commentary included the pros and cons of touching, and even mounting, the ripple strips at particular corners.

By ‘ripple strip’ I mean markings on the race track, whether they involve a ‘ripple’ or not. Denoted by some sort of markings, they typically begin before, and extend beyond, the apex of the corner. At times they are most prominent on the opposite side to the apex, where you push wide when pulling away from the apex. But their purpose is not to inform racing lines; rather they’re a warning about track boundaries and act as a deterrent to cutting corners.

As with most tracks, there’s always a couple of places where everyone is running over strips, trying to make the most of the track. Winton has a couple of corners with definite ‘ripples’, clearly letting you know you’ve run wide.

Lesson one for me on Saturday was to discover just how rough it can be when you go really wide at turn 10 (Northern BM). I didn’t intend on taking this left-hander quite so wide, but when one of the Clubman overtook me on the inside, I tried to give some space. Getting a little wide here is okay, but I now know just how uncomfortable it is out there on the track boundary.

Last round of the day and in my head it was time for a clear, fast lap. Self talk includes: “brake later”, “be braver”… First few turns went to plan. My foot hard on the throttle out of turn 4 I decided I could keep the power on through turn 5 (the big sweeper) and I’d just hang on tight. However, realising I wasn’t positioned properly for turn 5, I touched the brakes in order to turn the nose in. It did, but not enough. I’m also going way too fast. I’m not sure exactly what happened then, but the car got the wobbles, probably as a result of my panicky braking or turning (or both). It let go and whipped me around and by now I’m nothing but a passenger, heading in the wrong direction.

As my rear driver’s side wheel hit the strip there was a very brief moment of silence (maybe I was a wee little bit airborne?), then a KA-BANG as the car landed on the raised berm. I ended up in a cloud of dust, several metres off the track.

Lesson two is that some of these strips are raised and should be avoided, especially when out of control. Turn 6 is apparently known as ‘turnover corner’ and I can see why. I thank my lucky stars that didn’t happen and I’m also grateful that my little off-road expedition didn’t result in much more than dust filled nostrils. And a worthy lesson.

Maybe I’ll ask the MSCA if in future drivers can undertake a track walk, prior to competition. Understanding what’s on the boundaries; the size and shape of the ripple strips; and sighting other potential hazards would provide a different perspective. 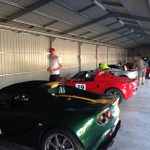