Catch up with our friends in Western Australia and recap the May early morning run in the latest edition of Quokka Talk thanks to Mike Hamilton.

The start of a new month for us West Australian-based Lotus aficionados meant it was time for another ‘Early Morning Run’ (EMR) in our much-loved hand built British sports cars. Thanks Lotus!

Things have been working well here in WA with different members of the club volunteering to take their turn at planning and leading an EMR along with booking the end of run food and drink. However, at the beginning of May at our monthly Monday night Lotus ‘Meet-n-Eat’ it came to light that we had a gap with no-one formally listed for leading the upcoming May EMR (whoops). Upon this being raised it was literally a matter of seconds before John and Robyn Edmondson put their hands up and volunteered (again) in their usual no-nonsense fashion. Thanks again John and Robyn! And so it was in the now slightly cooler air of a WA autumn Sunday morning that we stood at 8AM in our usual meeting ground that is the beautiful colonial town of Guildford. Looking at our cars neatly lined up together with the sun shining down and a few fluffy white clouds dotting the otherwise perfect blue sky, you couldn’t help but feel so very privileged to own a Lotus, to be part of something as special as Club Lotus Australia and to be amongst the fantastic club members that make it what it is.

Today, John and Robyn would be leading in their S2 Exige, which always looks the part, especially with those racing stripes! Joining the gathering there was also Dave and Dawn with their stunning Elise 220 now with its colour-coded hard top fitted ready for winter and making it look very much the little supercar.

Lena and Adrian and their always-shiny Ardent Red Elise 220 where ready for action and that was just as well given that Wayne our in-house YouTube enthusiast was ever present with his digital SLR camera filming the activities as they unfolded with his Canyon Red S2 Exige sitting proudly in the background.

Pulling in to the car park Steve arrived in his much loved S3 Elise S with its high revving 2ZZ-GE engine purring as he backed in to his parking spot. Steve’s daughter Ali was in her usual co-pilot seat and was still awake! A little-known fact about Ali is that she can fall asleep just about anywhere she chooses and this includes sitting in the passenger seat of a fast moving Lotus! Good on you Ali!

Last and by no means least, was Paul and his beautiful white S3 Elise, which he has just cleaned and detailed ready for the run and as such it was looking particularly sharp under the crisp morning sunlight. With Ellie sitting out of this months’ run I took the opportunity to invite my friend Brad to join me for the ride in our 2015 Elise S. Having completed the task of distributing the two-way radios I handed over to John who gathered the group together for a quick pre-run briefing and our usual safety reminders, after which it was time to get on the road. With engines started it was that moment on a run where everyone tries to decide when to move out of their parking bay and join (push in to) their preferred place in the train of Lotus as it slowly feeds out of the car park. It’s always amusing to see the balance of polite courtesy and restraint versus the “no way mate, I’m going next” approach. If I’m honest I probably fall in to the latter category, but I do my best to hold off when I can. 😊

Unsurprisingly, the run that John and Robyn had planned was brilliant! The first part was the run out and up in to the hills up through Kalamunda and then on to the always beautiful Mundaring Weir Road. What followed was a smooth fast cruise along some of our best local scenic roads which are scattered throughout the wide ranges of the Darling Scarp. A quick pit-stop at the historic railway town of Chidlow allowed some time for everyone to regroup for a chat and for those with their roofs still attached a chance to soak up more of the warm rays on offer from the WA morning sun.

With photos taken including the obligatory shot of our cars parked line astern in front of the Chidlow Tavern (previously known as the Oxford Inn) we were back on the road and heading across county to Berry Road, on which not one berry was sighted but on which mother nature had decided to scatter what appeared to be every single gumnut in the Perth hills! One gumnut even landed inside my car having entered via the open roof, presumably having been fired in to the air by John and Robyn’s Exige (thanks again guys).  Having endured the repeated impacts of what sounded like hundreds of small bb pellets and tens of giant marbles being repeatedly fired at the car (every Lotus owner knows these sounds only too well) we turned on to one of Perth’s best local driving roads – O’Brien Road. 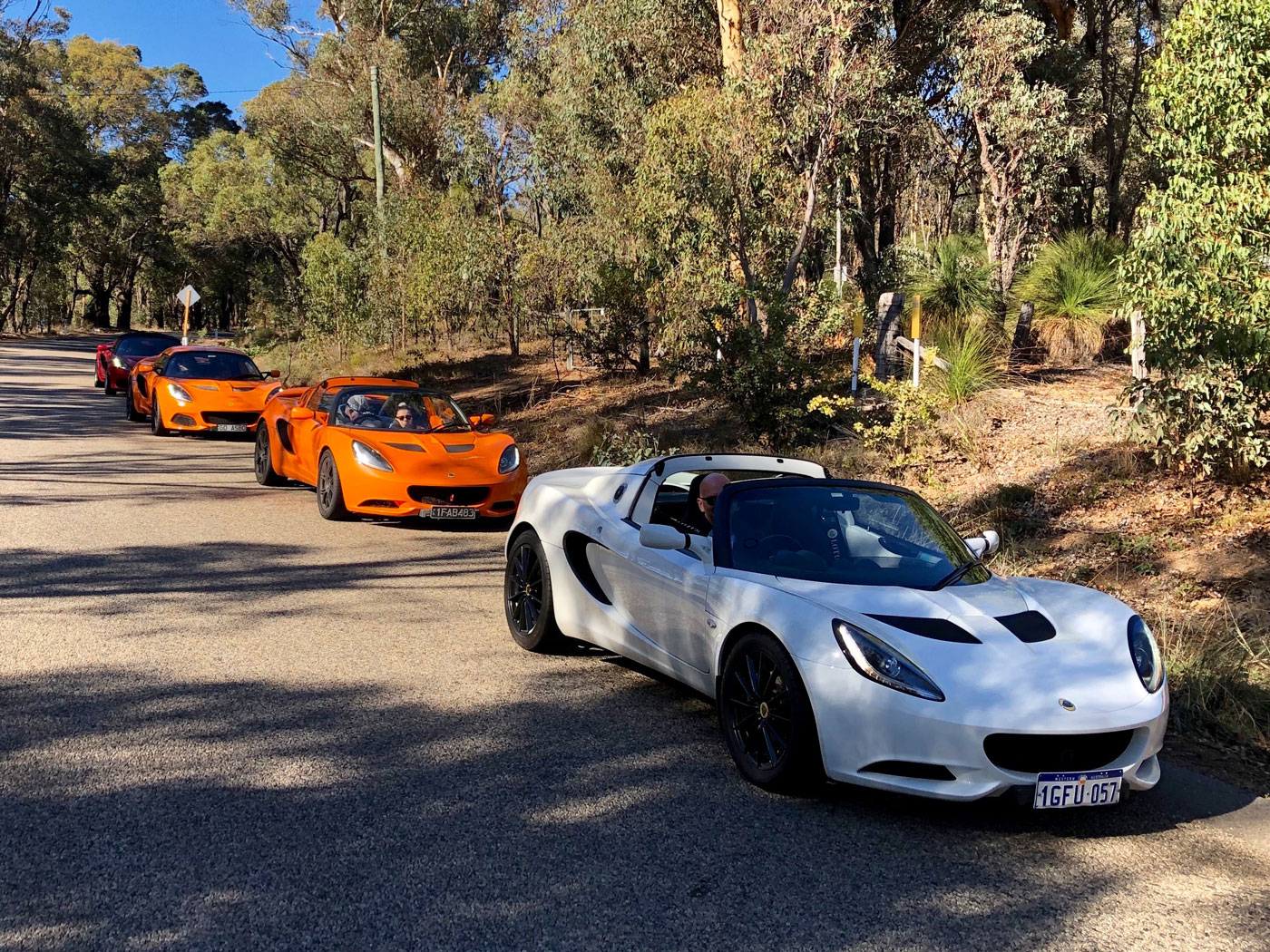 For a time, we continued at our usual safe and spirited pace, everyone threading their cars though the corners with typical Lotus finesse as the road rolled through the hills and unfolded before us. Unfortunately, our enjoyment was prematurely cut short by a white ute that was quite happy to slowly lead us along the remainder of our time O’Brien Road before we turned off for the final part of our run to enjoy the short but always exhilarating blast down what is known locally as ‘Roller Coaster Road’ before finally heading through some more of our favourite local ‘twisties’, whilst descending from the hills and down in to the local wine region that is Perth’s Swan Valley.

Brad and I had to leave the run at this stage with John leading the remaining pack on to the Mash Brewery for a well-earned drink and a spot of lunch, thus concluding our May EMR.

As it turns out, during this EMR my friend Brad was to do more than his fair share of driving and in the end, I had to pretty much kick him out of the driver’s seat in order to reclaim my spot at the wheel! Brad is now hooked on the Lotus experience and is already taking about the next time he can join us on a run. I wish him all the best of luck in convincing Ellie to give up her place!

Once again it was a fantastic run out in our amazing cars, on fun roads with great friends.  No matter which state you live in and no matter which Lotus you are sitting in, here’s to more great times out this winter – roll on June!